Traceability and detectability are the concerns for American lawmakers 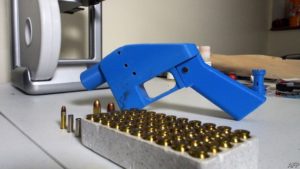 Cody Wilson, a self-described anarchist, fired the world’s first 3D-printed handgun in 2013. It was a crude, a single-shot pistol made almost entirely of plastic. He called it the Liberator (pictured) and posted the printing manual, in the form of software code, online. It was downloaded nearly 100,000 times and reposted elsewhere. Five days later the American government ordered Mr. Wilson to remove the files, which he did. But he contested the order in court, and years of litigation followed. Last month the case finally settled in his favor. On August 1st Mr. Wilson plans to repost the guide. Why did the government lose and what does that mean for gun regulation?

To stop Mr. Wilson from posting his guide online, the federal government deployed an unusual and rather dubious legal strategy. The State Department accused him of violating export-control laws that prohibit disclosing technical data about military equipment and munitions to foreigners. These laws were designed to stop someone from, say, copying the blueprints of a nuclear submarine and passing them on to China. Mr. Wilson countered that the application of these laws to his case was misguided, given that gun-making manuals already exist in the public domain. His argument that the government order violated his free speech won out. Even if he had lost the case, it would have had a little practical effect. Other sites had already reposted the manual. And Mr. Wilson had been lawfully mailing the code to American citizens. He has since focused on selling a more sophisticated product: a machine dubbed the “Ghost Gunner”, that carves the key component of an untraceable AR-15 rifle out of aluminum.

Amateur gun-making is not new. Federal law allows anyone to manufacture guns at home; a license is required only to sell or trade them. But gun-control advocates worry about the 3D-printed type for two reasons: traceability and detectability. They lack the serial numbers that register mass-produced guns with the federal government, so they cannot easily be traced. Made of plastic, they can also slip through metal detectors. Neither feature is unique to 3D-printed guns, but the concern is that the technology’s ease of use can turn anyone—especially those who might fail a background check—into a gunsmith. Technical know-how would no longer be required to make a firearm. And as 3D printers get cheaper or easier to rent, costs will go down too. (Get more info about Industry 3D Printers.)

Chuck Schumer, now the Senate minority leader, summed up this fear in 2013 when he warned that additive manufacturing would allow any bunch of felons or terrorists to “open a gun factory in their garage.”

There are some ideas for containing the risk. One measure—which passed in California and took effect there this month—would require anyone who makes a gun at home to register it and apply for a state-issued serial number.

The law in California also bans the sale or trade of homemade guns. But enacting a law and enforcing it are separate matters. Arrests for non-compliance are likely only after an untraceable gun is used to commit a crime. And with some 300m firearms in America, skirting the rules to acquire a gun is not difficult, regardless of how it was made. As one gun-control expert put it, “It’s a hell of the regulatory challenge.”