By the end of 2020 is expected that 3D printers build fifty homes designed to withstand seismic activity and prevent flooding. The local government donated land for the project and will provide the infrastructure required by the new neighborhood such as electricity and roads.

The CEO and co-founder of New Story Brett Hagler told to CNN that vulnerable families living on about US $3 a day will have the opportunity to move into the neighborhood once it is finished. He also said that low-income residents in Nacajuca currently live in “pieced-together” shacks that flood during the rainy season. 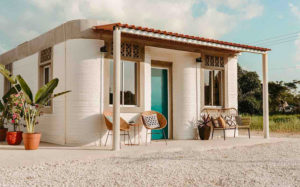 New Story has built more than 2,700 homes in Mexico, Haiti, El Salvador and Bolivia since it was founded in 2014 but the Tabasco project will be the first completed using a 3D printer.

We feel like we’ve proved what’s possible by bringing this machine down to a rural area in Mexico, in a seismic zone, and successfully printing these first few houses.”

The Vulcan II is an Icon creation, a Texas-based company that began collaborating with New Story two years ago. The 10-meter-long printer pipes out a concrete mix that is used to build the walls of the homes one layer at a time. A 47-square-meter home with two bedrooms, one bathroom, a living room and a kitchen can be built in a few days. Each 3D-printed home in the Nacajuca neighborhood will have curved walls and lattices to improve airflow and a reinforced foundation to help it withstand earthquakes. Échale has partnered with New Story to complete parts of the homes that can’t be 3D-printed.

Icon CEO and co-founder Jason Ballard explained that the construction process with the 3D printer has improved by “10 times” during the past year.

It is a house that anyone would be proud to live in.” – Jason Ballard 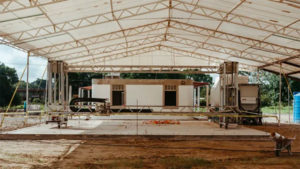 The innovative home-building technology has the potential to change the world, said Ballard.

Mexico Daily News A 3D printer is building a neighborhood of houses in Tabasco, https://mexiconewsdaily.com/news/a-3d-printer-is-building-a-neighborhood-of-houses/ published on Dec13 2019, re-edited and published by João Andrade on Dec16 2019;