Atlas 3D recently took a look at the current state of additive manufacturing simulation software in a two-part article series. In those articles, we spoke to several companies about how simulation in 3D printing is needed for reducing failed builds, and how it is particularly important for high-end industries such as aerospace, which are focused on making parts of repeatable quality for use in their applications.

Metal Additive Manufacturing isn’t cheap and requires prudence, with the machines costing millions of dollars and the materials costing thousands of dollars per kilogram. Failed builds are not a welcome thing, especially where cost and quality are drivers.

Based in United States (Indiana), the simulation company Atlas3D is another company making waves in the Additive Manufactruign simulation domain, and has recently released its cloud-based, International Traffic in Arms Regulations (ITAR)-compliant software solution known as Sunata.

Atlas3D, which was spun out of ITAMCO (Indiana Technology and Manufacturing Companies) in 2017, developed Sunata as a plug-in for Autodesk Inventor. Since realizing the potential value of Sunata, the company has released it as a stand-alone product.

What makes this product stand out in this rapidly growing simulation domain?

The key lies in its proprietary Thermal Circuit Network technology. 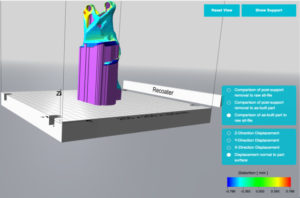 Atlas 3D has democratized the black art of additive manufacturing by providing our customers with the answer to the questions, ‘How do I orient this part and how do I support it?”

.Chad Barden (CEO of Atlas3D) in an interview

“We provide that answer by simulating 100+ intelligently chosen orientations with our proprietary algorithm dubbed the ‘Thermal Circuit Network,’ or ‘TCN.’ The TCN is the only simulation algorithm that is able to accurately simulate the thermal gradient at both the part and that microscale, allowing us to achieve the requisite accuracy without the computational overhead typically associated with build simulation.”, Barden states.

Many failed builds in metal additive manufacturing can be attributed to thermal distortions, which themselves can result from incorrect build orientation. The TCN technology eliminates failed builds by running over 100 simulations to determine the optimum build simulation and support material locations, where the distortions are minimized.

How to run these applications?

Watch a similar demo of the process in the video below:

Atlas 3D solved that problem by developing and releasing a version of Sunata that leverages GPU (Graphical Processing Units) capabilities.

The Graphical Processing Units are the engines in your computer’s video card. These are ostensibly designed to handle the countless calculations related to video processing, and in particular 3D view preparation. These calculations are very numerous (for every screen pixel) and frequent (for every split second the display changes).

Normally GPUs do process graphic requirements for the computer. However, with appropriate APIs, it is also possible to repurpose them for other uses, particularly if there is no immediate need for heavy graphics processing. Is what Sunata is doing here: they are making the video card do the work that the otherwise overloaded CPU would do.

Atlas 3D says that the resulting computations are sometimes 20X faster than by using the basic CPU of your computer.

In the graph below you can see the effect in some detail. The chart shows two lines, one (blue) representing the processing time required when using a single CPU, and the other (orange) line representing the time required when work is dispatched to the GPU. Three examples appear in the chart: a 30mm object with low complexity; a 180mm object with medium complexity and a 400mm object with high complexity. As you can see, the single CPU’s resource needs grow almost exponentially as the complexity and size rise. However, when using the GPU the elapsed processing time is mostly the same, regardless of the complexity or size of the object: 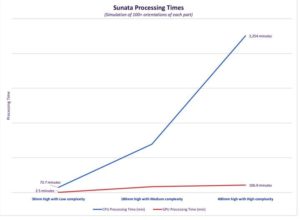 It happens because the GPU is a parallel device with tons of smaller processing units. For simple simulations only a few GPU elements are used; for more complex analyses Sunata simply dispatches more from the pool of GPU elements. I suppose at some point you might run out of GPU elements and elapsed time would start to rise dramatically, but it’s likely for most analyses you’d simply enjoy much faster results.

If you or your company are processing metal 3D prints, you probably should take a look at Atlas 3D’s Sunata-Tool.

Source: The article was gently conceded by Atlas 3D, and was re-edited by João Andrade on Feb22, 2019;