Liverpool-based supercar manufacturer Briggs Automotive Company  has revealed it is AM parts for its vehicles on an Ultimaker desktop platform partnering with 3DGBIRE.

The collaboration with engineers from the United Kingdom-based 3D print solutions specialist has enabled BAC to print over 40 parts for its single-seater supercars including prototypes and end-use parts using the Ultimaker S5 and materials from DSM, via Ultimaker’s Material Alliance Program.

“It’s been fantastic, it allows us to create something and have it ready to test in a matter of hours is game changing for BAC. We’re already using it in all aspects of production from R&D to prototyping to end use parts. It’s also had a big impact on cost savings for particular parts; for example the cost price of our wing mirrors used to be £60, now we can print them in two parts for just £10 total cost. 3D printing really has been a revelation for us at BAC.” 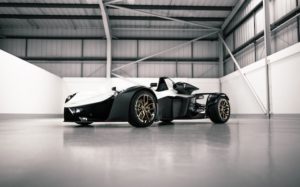 The British manufacturer is known for creating the world’s only road-legal, single-seater supercars, the BAC Mono and BAC Mono R. Using the Ultimaker S5, BAC has been able to bring production in-house and reduce the design-to-manufacturing times for parts with complex geometries.

The company is no stranger to 3D printing, having been employing the technology throughout the development of its next generation Mono R. Last year the company teamed with Malcolm Nicholls Ltd to print a series of parts using materials from DSM with the RPS’ NEO 800 stereolithography platform, and also harnessed Stratasys’ technology to produce a functional prototype of an air intake system.

The General Manager at 3DGBIRE Daniel Abram said he believes the partnership exemplifies the continued relationship between the automotive industry and AM.

“From R&D and prototyping, to manufacturing aids, to the production of end use parts, 3D printing is saving businesses likeBAC money and slashing lead times. This is just the tip of the iceberg, 3D printing is becoming a prominent force in automotive manufacturing with companies like BAC leading the charge and developing new applications for the technology. We can’t wait to help BAC further integrate 3D printing into their business and investigate what other doors we can open with regards to manufacturing.”, summarized Daniel Abram.