The U.S. Army Corps of Engineers’ Construction Engineering Research Laboratory was testing the 3-foot-wide footbridge last week, hoping it would be able to withstand the 15,000 pounds it was designed for. It blew that away, not cracking under a hydraulic actuator until it was under the equivalent of nearly 45,000 pounds.

It’s really exceeding the designed strength by quite a bit, so it’s really proving it is a valid way to construct structural members, like bridges.”

CERL adopted Additive Manufacturing with concrete in 2015, starting with a simple fighting position and a guard shack. Two years ago, it 3D-printed a barracks with straight walls, and last year, it printed barracks with angled walls that is twice as strong with only 10-15% more concrete. 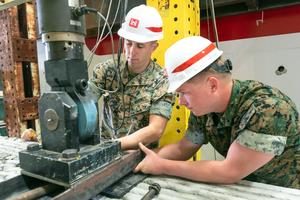 The 3D printer works more or less like those used at schools and maker spaces, but instead of printing layers of plastic, it prints layers of concrete.

It’s fairly similar. There is a huge difference in scale, so you get all the problems associated with scale,”  “But as far as the fundamentals of the technology, it’s essentially the same, except for instead of using a plastic filament, you’re now using a concrete pump with a concrete hose and you’re feeding concrete through.”

-Megan Kreiger, the printing lead on the project

Using concrete, which is heavier and doesn’t solidify as quickly as plastic, does limit them on the shapes they can build. Each layer is about an inch thick and cures after a few minutes:

“So with regular 3D printing, you can get all kinds of crazy 3D geometries. With concrete, you can still get a little bit of variation in geometry, but it’s still wet concrete as you print, so there’s more limitations in what you can do. It really is quite fast, and the concrete itself, after about 24 hours, is relatively strong. We have the ability here to basically continuously print a structure from the bottom to the top.”

Image:Stephen Haas from The News-Gazette
Researchers & U.S. Marines look at the sensor data after testing a 3D-printed concrete structure.

The bridge — which consisted of three sections totaling 33 feet in length — was built by seven or eight Marines in about six days. A few of the Marines who built it in December at Camp Pendleton in California were in Champaign last week to help test the slabs. Capt. Eric Satterthwaite stated that it was cheaper and faster to build the bridge with a 3D printer:

With the old methods, we would have used at a minimum 12 guys, but we were able to do this whole project with seven or eight guys, so we were able to cut down on people. And it would have been a lot of wood involved because we would’ve had to fill the whole forms and then pour the concrete in them.”

First Lt. Joshua Raphaelson said a 3D-printed bridge could be used both in military or humanitarian settings.

“A footbridge, we can get troops across, but in a humanitarian disaster that takes out bridges, you can build a bridge to get people across, or we can build shelters out of 3D printing for people to stay in, or we can build bunkers for us to stay in. It makes it faster, cheaper, quicker and more standardized.”