Frank Stephenson, a former car designer is looking to revolutionize the design of the child car seat with the project BabyArk. The child safety seat market is not known for its bold innovation; parents want tried and tested devices that convey security through bulk and heft. New start-up BabyArk is attempting to transform radically this market with a product that uses new technology and natural forms, an organic, enveloping object that feels as if it has evolved, rather than been made from scratch. Its designer, Frank Stephenson, is firmly committed to the idea that nature often has the best ideas.

I believe in finding out how nature has found its solution and developing it from there,(…)’

BabyArk combines natural forms with high-tech materials, including lightweight plastics and carbon fibre, and new manufacturing processes, most notably a zero-waste additive manufacturing process. At the seat’s core is another innovation, an impact-absorbing spiral tube that adds a hidden layer of protection. In the event of a major impact, the energy that’s transferred to the seat is dispelled by this tube, which deforms to drastically reduce the effects of the shock on its fragile cargo. Naturally, everything is recyclable, including the spring.

It takes inspiration from protective shapes in nature, like the egg. It’s very organic-looking object.’

Stephenson’s portfolio of car designs included the BMW X5, the original contemporary SUV, as well as a couple of modern classics, BMW’s original revived MINI from the turn of the century and the transformation of the Fiat Trepiùno concept into the Fiat 500. Although these two hugely successful small cars re-shaped the new century’s car market, Stephenson didn’t shy away from the high-end. He subsequently worked on Ferraris and Maseratis, along with a stint as design director at McLaren Automotive. He recently gave a talk at NASA, an indication of the breadth of his interests and influences. Find out more about Automotive Additive Manufacturing. 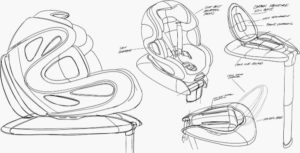 ‘- After my time at McLaren, I wanted make a difference,’ (…), ‘My projects always have to bring something new to the market and I try to keep my designs timeless and not focus on fashions or fads.’ Although the baby seat’s structure is exposed (a nod to the sports car ethos of showing off the engine), the designer explains how it ‘takes inspiration from protective shapes in nature, like the egg. It’s very organic-looking object.’ 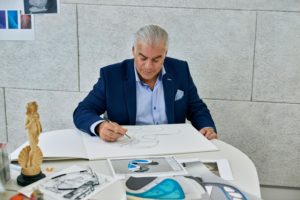 ‘This is a product that is about protecting your most prized possession.’ The act of take it in and out of the car is also designed to be straightforward. ‘We want it to be a no-brainer that you’ve installed it correctly,(…)’

There’s also a key fob and warning app to prevent the unthinkable but all too common act of leaving a child behind in a car. BabyArk is expected to come to market early next year and should bring a new level of performance to a product that’ll always be one of the most important things you ever buy.