Researchers from Switzerland’s Ecole polytechnique fédérale de Lausanne have shown the ability to 3D print objects up to 2 cm in size in seconds. Unlike every other Additive Manufacturing technology, their process prints the entire object at once. The researchers published their findings in the journal Nature Communications.

The report of Loterie et al. dub their process tomographic volumetric additive manufacturing. The technology builds on preceding work that casts multiple beams of light onto a vat of transparent resin, allowing for rapid production of a printed part. However, the resolution for these past processes has been limited to 300 microns (worse than most desktop FDM printers) and the resin must be transparent.

To overcome these issues, the EPFL team developed a unique method that casts DLP light onto a rotating vat of photopolymer resin. Rather than cast light in standard 2D patterns seen from a single angle (above or below the object), their technique uses patterns based off of projections of the object from different angles similar to a CT scan. The intensity of the light is not enough to solidify the resin at any point in time, but once the entire vat has been exposed to light from every angle and by every pattern, “a three-dimensional distribution of accumulated light dose is created” that causes the resin to solidify all at once. Necessary for this light dosing method is a high viscosity resin, which reduces the blurring associated with the diffusion of light during the process. You really have to see it to believe it.

The team is now able to 3D print hard and soft centimeter-scale parts in less than 30 seconds. A tiny model of Notre Dame Cathedral with 80-micron features was printed in just under 20 seconds. 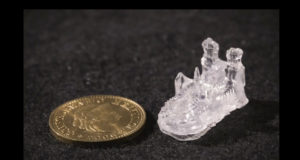 A hollow 3DBenchy with a hollow 500-micron chimney cavity was printed in 25 seconds. To improve the quality of the prints, a closed-loop control system using a camera was integrated into the process. So far, the scale of the printing technology is limited to just a couple of centimeters, but the researchers believe that they can scale it up to fabricate objects up to 15 cm in size.

To commercialize the technology, a startup called Readily3D was spun out of the university. The exact nature of that commercialization has not yet been announced, but the technology holds particular promise for soft, AM objects.

It could be used for to 3D print scaffolds seeded with stem cells for creating tissues or organs.

The researchers have already worked with a surgeon to 3D print arteries. According to the company’s CEO Damien Loterie, the trial results “were extremely encouraging.” Other applications Readliy3D is considering include customized hearing aids and mouth guards.

As the researchers pointed out, there have been other methods for tomographic 3D printing already explored. While Lawrence Livermore National Laboratory (LLNL) is already at work on its own form of the technology, we know that Adrian Bowyer of RepRap fame has his own take on a tomographic technique that uses an electric current, though he doesn’t have the U.S. government backing him up like LLNL. Regardless of who comes next, it seems as though we’re on the verge of yet another leap in rapid AM.