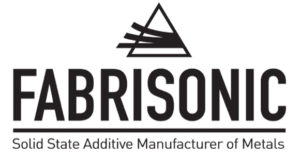 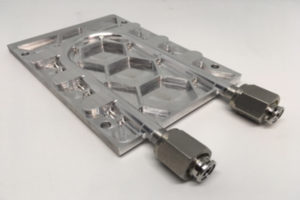 Heat exchangers, used to conduct and remove heat from critical components, are commonly utilized in the industry from micro-sized cold plates inside computers to room-sized applications for commercial HVAC. NASA has unique and exacting requirements for light-weight, high-performance systems, often used in harsh environments (think Mars). 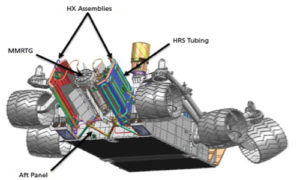 NASA’s Jet Propulsion Laboratory (JPL) built the heat exchangers for the Mars Curiosity Rover pumping fluid through the HX to dissipate heat. The current production method at JPL starts with a CNC milled structural orthogrid (thin ribs on a thin plate) which has aluminum tubing that is epoxied into place.

Current production pumped fluid loops for extraplanetary vehicles are made of 1) a structural orthogrid plate and 2) series of thin wall pipes that are epoxied into place (see below).   This technique is well proven and tolerant of manufacturing errors.  However, the epoxy is a poor conductor of heat, the arrangement is heavy, and production takes up to nine months for a single part. 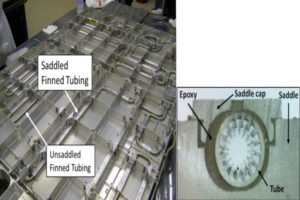 Ultrasonic Additive Manufacturing (UAM) is a 3D metal printing technology that uses high-frequency ultrasonic vibrations to scrub metal foils together layer by layer as opposed to using a directed energy heat source (e.g., laser, e-beam, etc.). UAM systems are integrated into CNC frameworks to enable subtractive operations during the additive ultrasonic process—a form of hybrid additive manufacturing. By combining a hybrid system, with both additive and subtractive processes, UAM can produce complex internal geometries considered impossible to replicate with conventional manufacturing. Additionally, Ultrasonic joining is a solid-state process, which enables directly printing ‘difficult’ alloys such as 6061 and 7075. Since the process does not heat the metal past 250 °F (much less melt it) the chemistry and grain structure of the incoming feedstock is retained.

Printing HX’s allows the metal tubing to become integral to the surrounding structure of the device, allowing conduction from the heat source (electronic package) to the cooling fluid in the most efficient path possible. Several advantages to 3D metal printing with UAM were discovered. Most importantly, the new design increases thermal performance and lowers weight vs. the tube/epoxy methodology. Additionally, the lead time for this type of HX is dropped from nine months to only nine weeks.

The tube/epoxy methodology has numerous steps, each accompanied by a tedious inspection round. The 3D UAM printing is accomplished in one machine, at one time, which greatly simplifies the process from start to finish, reduces time, and eliminates multiple production steps that can lead to errors. 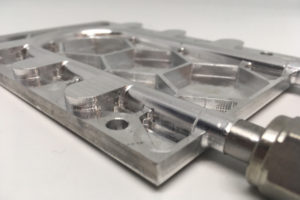 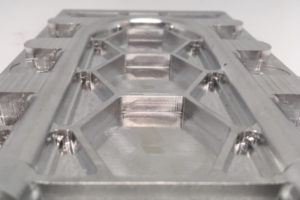 The Requirements from NASA

At the onset, NASA JPL laid out specific requirements for the development program:

The Fabrisonic team studied the design space for internal geometry from .010” to .500” channels.  The team developed optimal UAM parameters for 3D printing hermetic seals, as well as post-weld heat treatments to enhance properties.

Through the R&D program, Fabrisonic has developed two unique concepts and have integrated them into the UAM manufacturing process:

*Friction welding (FRW) is a solid-state welding process that generates heat through mechanical friction between workpieces in relative motion to one another, with the addition of a lateral force called “upset” to plastically displace and fuse the materials. Because no melting occurs, friction welding is not fusion welding.

Comparison to State of the Art

The team did an analysis of current production practice versus UAM for a specific design under consideration, and the results were quite encouraging:

The team is currently working to quantify thermal performance improvements.

In December 2018, successful testing was completed. After the R&D program was complete, the team made three prototype parts that went through ground-based qualification testing including:

View video at this link: https://www.youtube.com/watch?v=kVMiU6V5pUM 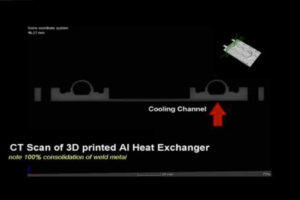 Computed Tomography scan of complete 3D printed heat exchanger.  This image shows a slice of both tubes 3d printed into the overall structure.  No discontinuities were found. 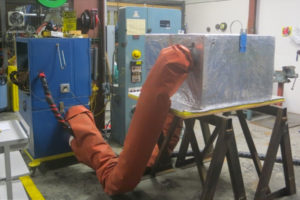 Thermal test chamber.  It can be heated to 150 C and cooled to -150C for testing how parts grow and shrink during orbit from direct sun, to the shadow of the earth. 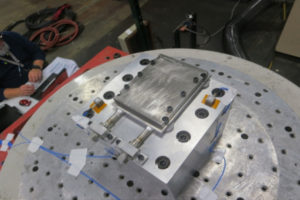 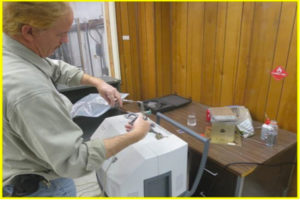 Helium leak testing after vibe testing.   All parts tested had a leak rate better than 10-8 std cc/sec, which is NASA requirement for extra-planetary missions.  With missions measured in years, spacecraft must be leak tight.

Fabrisonic has successfully completed all tests required by NASA JPL. The team is working with NASA JPL on three follow-on programs focused on technology insertion into upcoming missions.

“We’re beyond thrilled with the team’s achievements in such a short time,”

“To see the impact of UAM on this vital mission continues the validation of our patented UAM process. We are eager to continue our partnership with NASA and see our heat exchangers launched into outer space.”