The process is called multimaterial multinozzle 3D printing (MM3D) and was developed by researchers from Harvard’s Wyss Institute for Biologically Inspired Engineering and John A. Paulson School of Engineering and Applied Sciences (SEAS). MM3D uses high-speed pressure valves that continuously and seamlessly switch between up to eight different printing materials at a speed of up to 50 times per second.

The technique enables the creation of complex shapes in a fraction of the time currently required using printheads that range from a single nozzle to large multinozzle arrays. The 3D printheads used in the process are also fabricated using Additive Manufacturing, which allows for customization.

When printing an object using a conventional extrusion-based 3D printer, the time required to print it scales cubically with the length of the object because the printing nozzle has to move in three dimensions rather than just one, (…)”.

-Mark Skylar-Scott, a researcher associate at the Wyss Institute

The combination of multinozzle array makes possible to switch between multiple inks rapidly. It eliminates the time lost to switching printheads, which helps to “get the scaling law down from cubic to linear, so you can print multimaterial, periodic 3D objects much more quickly,”, stated Skylar-Scott. 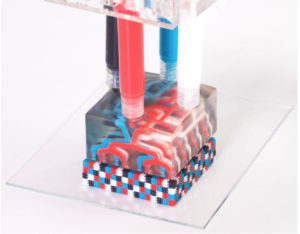 From now, commercial 3D printers are only able to build objects from a single material at a time. While there are inkjet printers that are capable of multimaterial printing, these are constrained by the physics of droplet formation.

An AM method that allows the use of multiple materials to create one object is extrusion-based printing, but this process is extremely slow: it would take about 10 days to build a 3D object about one liter in volume at the resolution of a human hair and print speed of 10 cm/s using a single-nozzle, single-material printhead. The Y-shaped MM3D  junctions inside the printhead solves this barrier, where multiple ink channels come together at a single output nozzle.

The Harvard team calculated and tuned the shape of the nozzle, printing pressure, and ink viscosity so that when pressure is applied to one of the “arms” of the junction, the ink that flows down through that arm doesn’t cause any of the other arms to spill ink. The researchers said this prevents the inks from mixing and preserves the quality of the printed objects. A bank of fast pneumatic valves to operate the printheads is also used, facilitating this one-way flow behavior.

The length of the ink channels can be adjusted to account for materials that have different viscosities and yield stresses, which would allow them to flow more quickly or slowly than other inks for custom multimaterial fabrication”

-Jochen Mueller, a researcher at Wyss and SEAS.