Local Motors has recently signed a deal with door2door to bring its smart additive manufactured EVs to Germany.

The Local Motors is in the vanguard that first leveraged the concept of a distributed automated factories and it did so by making heavy use of LFAM composite AM for large sections of the Olli vehicles. Arrival is similar to Tesla: the company that has single-handedly opened a path to electrification and production automation. Tesla has not significantly implemented additive manufacturing processes in its production workflows yet but it is not related to high production demands. Traditional car manufacturers have already implemented 3D printing for tools or final and spare parts production, however, Tesla has not yet significantly done so, only for some casual part repair.

Tesla and Arrival are likely to use additive manufacturing for prototyping and such part repair operations or for end of arm robotic tooling (EOAT), given their heavy use of versatile robotic platforms. At the same time, if and when economies of scale will justify it, transforming a robotic arm from an assembly tool or subtractive system to an additive one, is becoming an increasingly streamlined transition. Even if that additive technique is then used to make tools for traditional manufacturing. Arrival has been developing its own hardware, software and robotics since the year of 2015 and is using these technologies to the electric vehicle production through the Microfactories, which are small-footprint, low CapEx and can be deployed quickly to serve local communities. 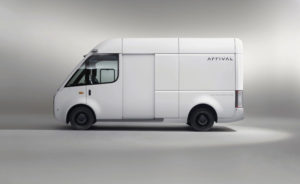 Microfactories use cell-based assembly instead of the traditional automotive production line. They can be deployed quickly by making use of existing commercial spaces and producing any type of vehicle to meet demand.

Each Microfactory will serve a city and its community – sourcing from the local area and developing custom vehicles for the region they’re in. Through the supply chain centralization, Microfactories contribute to reduce the environmental impact of manufacturing. These are all concepts that the 3D printing industry is already quite familiar with and is ready to revolutionize the system.

The company is now working on the production of the Arrival car, in collaboration with Uber for the ride-hailing industry. The Arrival Car will join Arrival’s previously announced commercial products, the Bus and Van, to provide cities with a multi-modal zero-emission transportation ecosystem that they require in order to meet their sustainability goals over the coming years. This will create cleaner, more equitable mobility solutions in cities that the company believes will have a radical impact on their health and opportunities for people.