Things move quickly in desktop resin Additive Manufacturing. The Peopoly Phenom is a large scale masked stereolithography (MSLA) 3D printer. Maxing out at a build volume of 276 x 155 x 400 mm, the Phenom is some 170% larger than its previous offering, the Moai 200. It’s priced competitively to appeal to both makers and businesses; $1,799.

The Peopoly Phenom is part of Peopoly machines past, opting for LCD masking tech over the laser tracing of traditional SLA style printing. 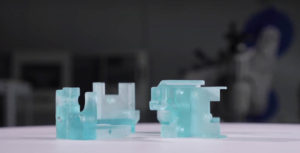 The main difference is that where a laser SLA system has to trace every element of a layer in sequence, hardening the resin as it goes (similar to filament extrusion-based printing, which also has to trace the path set out when slicing a model into G-code), LCD masking instead exposes the entire layer on its LCD, through which UV light from an array of LEDs shines.

Powering the Peopoly Phenom’s resin curing abilities is a light engine that uses a 12.5-inch 4K resolution LCD panel, which sits above an LED array that provides UV light. Between the two lies a custom lens designed to both distribute the light evenly across the build plate, and, according to Peopoly’s release, block infrared heat from the lamps. Paired with a fan array and heat sink combo, it would appear that a great deal of attention has been paid to keeping temperatures and operating conditions for the LCD and LEDs optimal.

The print plate lowers into the resin, drawing back up as the print progresses. While efficient for material costs, this method can come at a cost in print quality or the risk of the print breaking, thanks to the physical necessity of peeling the print off the bottom of the resin vat with each layer change.

MSLA printers typically use some variation on FEP film as the transparent bottom of their resin vats. As the layer changes and the build plate pulls away, this flexes somewhat, releasing the print and allowing fresh resin to flow in for photopolymerization on the next layer’s exposure to UV light. For the Phenom, Peopoly claims its special film processing technique reduces the bond between the hardened resin and the vat, lessening this peeling effect and, in theory, improving the print success rate and print quality.

The Phenom’s 12.5-inch 4K screen results in a pixel size of 72 microns in the X- and Y- axes. Comparable to Peopoly’s previous large-format resin machine, the Moai 200. In real-world terms, expect high detail print across that huge build volume.

On closer inspection of the printed parts, users will notice a minute difference in the surface finish in the X- and Y- axes – a reality of
the Phenom using an LCD screen for its printing. Pixels have sharp edges, which means that the boundaries of layers in those two planes will show the subtle ‘staircase’ effect.