“Innovation requires iteration. Iteration is the key to engineering. If you can speed that up, your time to market accelerates.” – AM Lab Manager, Global CPG Manufacturer

They conducted an in-depth analysis and comparison of the part turnaround speed and cost differences between Stratasys’ Fortus, and Rize One, both of which operate in their lab. They selected the Fortus for this comparison with Rize One because they agreed that it is the closest comparable system to Rize One from a capability standpoint.

CPG’s lab manager outlined a few facts and averages for his company:
• Each engineer at his company works 235 days per year, excluding holidays and vacation days.
• CPG has 100 engineers, each producing an average of 12 unique designs per year, for a total of 1,200 unique designs per year
• Each engineer averages four iterations per design, however bear in mind that they are up to 26 iterations for one design
• The first iteration of a design takes five days vs. just one day for subsequent iterations
• Outsourcing requires an average of five days to deliver a part for each iteration of a design vs. two days for Fortus due to post-processing required after 3D printing to remove supports and one day for Rize, since the part is available immediately after 3D printing with the Rize One 3D printer. 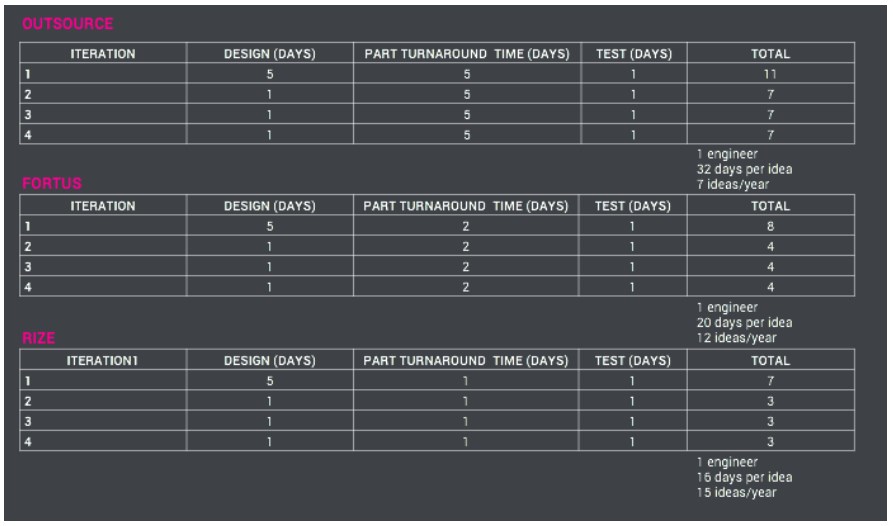 They discovered that, on average, completion of all four iterations of a design takes four days less per engineer using Rize vs. Fortus, and 16 fewer days vs. outsourcing. That four-day delay using Fortus means Rize is 20% faster per idea per engineer than Fortus and enables each engineer to produce 25% more designs than Fortus. Alternatively, if desired, it enables CPG’s engineers to complete one additional iteration per idea per engineer in less time than it takes Fortus to complete four iterations.

Rize is 20% faster per idea per engineer, and 25% more ideas per engineer in comparison to Fortus. Their analysis became even more compelling when they outlined and compared the costs of the two systems which will be described below.

The comprehensive costs associated with post-processing are frequently overlooked, including the materials, labor and special facilities, equipment and utilities required. Since Rize is a zeropost-processing system, there are no post-post processing costs. That is not the case with Fortus. CPG spends $600 per year on the solvent in which Fortus 3D printed parts must be dipped for hours to remove the supports. Labor costs for post-processing run between $25,000-$50,000 per printer. Since CPG has six printers in addition to Rize One, their post-processing
labor cost is between $150,000-$300,000 annually. However, for comparison reasons, the postprocessing
labor cost associated with CPG’s one Fortus is between $25,000-$50,000 per year.

What does the 4,800 days of part delay per year, and therefore, delays in time to market, cost CPG? It’s difficult to calculate specifically, but they estimate it could be millions of dollars. In May of 2016, IndustryWeek Magazine interviewed a mid-sized manufacturer about this very topic. He explained that a competitor had beaten them to market with a new feature that was capturing their market share, potentially costing them $10 million in lost sales for the next year. Even if they could only regain half of the loss, every week of delay was costing them nearly $10,000 in lost profits, significant for a mid-sized company. If we apply those numbers to our CPG manufacturer, it would cost them nearly $7M in that one year. The cost of delays is of course dependent upon the value of the features, market and more.

Fortus and Rize One Cost Comparison

Considering all the above costs, CPG’s analysis revealed that the total annual cost of the Fortus comes to $90,100 (excluding the estimated millions incurred due to part delays) vs. a maximum of $13,020 for Rize, using the top maintenance plan. This excludes the future cost implications of a competitor potentially beating them to market farther down the line due to part delivery delays and/or the risk of sub-optimal designs due to fewer iterations. Companies with multiple product lines would likely see exponentially greater cost impact. 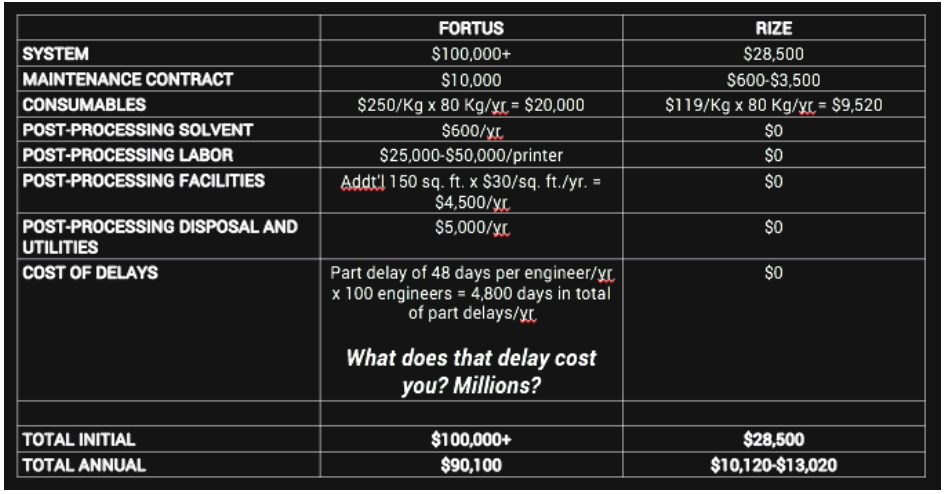 Price comparison between Rize One and Fortus

Within just a few weeks of installing and using their Rize One 3D printer and completing their speed and cost analysis, the company began diverting as many print jobs as possible from Fortus to Rize One. Doing so is transforming their product design and development process.

Remarked the company’s lab manager, “The time savings on part turnaround using Rize One is
significant. With Rize One, we can deliver a usable part to an engineer the next day. You can
imagine how this time savings escalates when taking into consideration the multiple iterations
required for each component.” 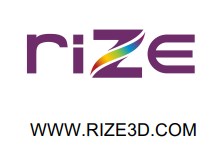