The “Effect of powder size distribution on densification and microstructural evolution of binder-jet 3D-printed alloy 625″ paper unveils the job of a team of researchers with a gas-atomized alloy 625 powders test of three different powder size distributions including 16–63 μm (full), 16–25 μm (fine) and 53–63 μm (coarse). The powders were 3D printed with green relative bulk densities of about 52%, 45%, and 48%, respectively, followed by vacuum-sintering at temperatures between 1225°C and 1300°C for 4 hours. 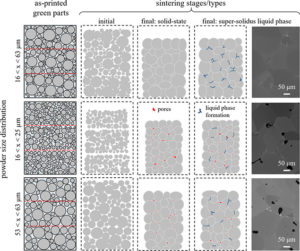 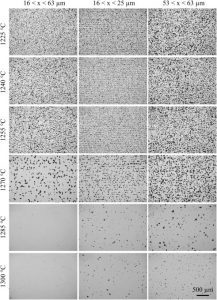 The researchers, using the binder jetting process, additive manufactured samples of each powder size distribution and sintered three samples from each set to study densification behavior. The bulk density and mass of each sample was measured when both wet and dry. For all particle size ranges, the relative bulk density increased with increasing sintering temperature from 1225°C to 1285°C. For temperatures above 1270ºC, it was also found that the coarse powder range samples had the lowest sintered density while the fine powder range samples showed the highest density.

“In general, it is thought that wide pore size distributions and low green density associated packing defects affect microstructural evolution, in particular the grain size and diffusion distances in final stage sintering and this controls final density.”, …, “Thus, it was essential to examine the effect of the PSD on the average microstructural descriptors associated with the densification process. These include the average grain and pore size.”, states the team of researchers.

In the experiments, binder jet additive manufacturing parameters including layer thickness, binder saturation and drying time were kept constant in order to study the effect of powder size and particle size distribution on the densification behavior. The following conclusions were reached:

During densification of parts sintered between 1225 °C and 1300 °C for 4 h, the 16–25 μm powder showed higher linear shrinkage compared to the 16–63 μm and 53–63 μm powders. This correlated with lower green density of 45% achieved from the fine powder compared to the 47% and 52% for coarse and full range powders, respectively. Additionally, it was seen that as the sintering temperature increased to 1285 °C or higher, linear shrinkage in z direction was greater than that in the x and y directions, especially in 16–25 μm powder. This is thought to be due to the effect of gravity on particle rearrangement during sintering.” 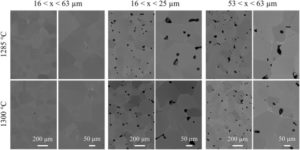