The defense sectors as U.S Navy and Army bring additive manufacturing technology on board to speed up operations. The Navy’s USS George HW Bush (CVN 77) aircraft carrier will be upgraded with conventional and 3D printed parts.

There are a lot of first-time jobs all around, given this is the first time Bush has sat on keel blocks since being built. With the size of this work package, it will take a total team effort by NNSY.”

The scheduled overhauling of the $6.2 billion aircraft carrier will take place at the Norfolk Naval Shipyard (NNSY). Moreover, the United States Marines and the Army are integrating additive manufacturing on a wider scale for various applications. 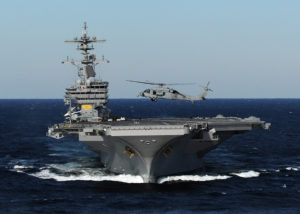 A few years ago, the U.S. Department of Defense has taken measures to incorporate advanced manufacturing techniques into the military and air force operations. This also includes the rapid adoption of 3D printing. At the Marine Corps Air Ground Combat Center in Twentynine Palms, the 2nd Battalion, 7th Marine Regiment is the first unit to deploy a 3D printer in their unit. The 1st Lt. Ryan McCormic, motor transport officer for 2nd Battalion, 7th Marine Regiment said,

One of my plans is that we take our 3D printer with us on (deployment) and utilize it in a country when somebody tells us that we have a dead vehicle or a [faulty]weapon.”

Furthermore, the Marine Corps Systems Command (MCSC) has also set up an Advanced Manufacturing Operations Cell which provides round-the-clock help for Marines using additive manufacturing technologies. The Capt. Matthew Friedell, AMOC project officer, said, “The AMOC is manned 24/7 to help Marines talk through their problems and find solutions quickly. With the current state of manufacturing technology and digital manufacturing across the world, there’s no reason Marines shouldn’t be well educated on it and have access to it any time of day.” Friedell explained further the purpose of AMOC. He said, “The Advanced Manufacturing Operations Cell is a team of Marines and civilians centered on helping fleet Marines find parts they need to keep their equipment functioning efficiently.” 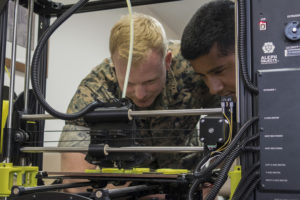 Simon and the 3D Printing process

In a recent collaboration between nScrypt and various branches of the U.S. Army have manufactured a 3D printed version of the popular memory skill game Simon. This demonstrated the capabilities of the nScrypt FiT system and its potential to 3D print electronics.

Direct Digital Manufacturing is going from a CAD file to a final, multi-material electronic product, like the Simon Says, in a single machine, without retooling.  People love to play with the Simon Says, which we bring to our trade show booths, and they are amazed that it was made in a single build.”

The making of Simon was a joint effort among the New Jersey-based U.S. Army Armament Research, Development and Engineering Center (ARDEC), the Army Research Laboratories in Maryland, and nScrypt.

The manufacturing process and its findings were published in a paper titled “Direct Digital Manufacturing For 3D Electronic Packaging.” It was jointly authored by James Zunino of ARDEC, Jaret Riddick of ARL, nScrypt CEO Ken Church, and three engineers at nScrypt, Sam Leblanc, Casey Perkowski, and Dasan Costandi,

The Simon 3D printed circuit was made with ABS & PLA and built using extrusion and milling process in a single step in the FiT system.

The authors of the paper explained the future potential of 3D printing electronics,