A team researchers from Spanish and Israel led by Pilar Amo-Ochoa from the Autonomous University of Madrid (UAM) has developed a versatile 3D printed plastic-composite sensor capable of detecting tiny amounts of water. The additive manufactured material is non-toxic and changes its color from purple to blue in wet conditions. 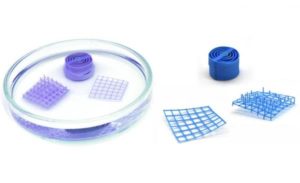 The scientists’ new sensor-material is a so-called copper-based coordination polymer, a compound with a water molecule bound to a central copper atom. They used the Deutsches Elektronen-Synchrotron (DESY) light source, PETRA III, to analyze the changes of the material upon heating.

On heating the compound to 60 degrees Celsius, it changes color from blue to purple.”,…,” The material was heated to 60°C, which removed the water molecule bound to the copper atoms, ultimately causing the color change. “This change can be reversed by leaving it in the air, putting it in water, or putting it in a solvent with trace amounts of water in it.”

“Having understood this, we were able to model the physics of this change,” explains José Ignacio Martínez from the Institute for Materials Science in Madrid (ICMM-CSIC). The scientists were then able to mix the copper compound into a 3D printing ink and printed sensors in several different shapes which were tested in air and water. These tests showed that the 3D printed objects are even more sensitive to the presence of water than the compound by itself. In solvents, the printed sensors could already detect 0.3 to 4 percent of water in less than two minutes.

If it is dried, either in a water-free solvent or by heating, the material turns back to purple. A detailed investigation showed that the material is stable even over many heating cycles, and the copper compounds are evenly distributed throughout the printed sensors. Also, the material is stable in air over at least one year and also at biological relevant pH ranges from 5 to 7.

“This work shows the first 3D printed composite objects created from a non-porous coordination polymer.”,…, “It opens the door to the use of this large family of compounds that are easy to synthesize and exhibit interesting magnetic, conductive and optical properties, in the field of functional 3D printing.”

-Félix Zamora, co-author from the Autonomous University of Madrid

The development opens the door to the generation of a family of new 3D printable functional materials, as the scientists write in the journal Advanced Functional Materials.